I just finished reading "Struggles of a Mad Man" in the Dec 3, 2007 issue of Business Week. The article looks at Saatchi & Saatchi CEO Kevin Roberts and how both his traditional advertising business "may be flirting with irrelevance".

As a former media buyer for FCB in the early 90's, it's certainly been fascinating (and fun) to see the balance of power shift more towards the folks with data and quantifiable results. It's what I find so exciting about the continued convergence of media and creative - like social media applications / widgets - the line between creative and inventory these days is certainly blurring. So I was taken aback to see there are still senior advertising people like Roberts who think that creative and analytical are two completely different worlds. Roberts is quoted as saying "A media agency couldn't emotionally touch the consumer in a million years," "They have no f---ing idea. They don't have feelings. They're media people." Wow. Granted, most media agencies weren't founded to do great creative, but to assert that media people don't "get" brand building and connecting with people smells more like fear than insight.
Posted by Liza Hausman at 2:06 PM 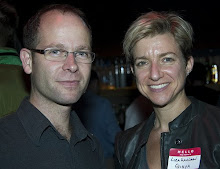